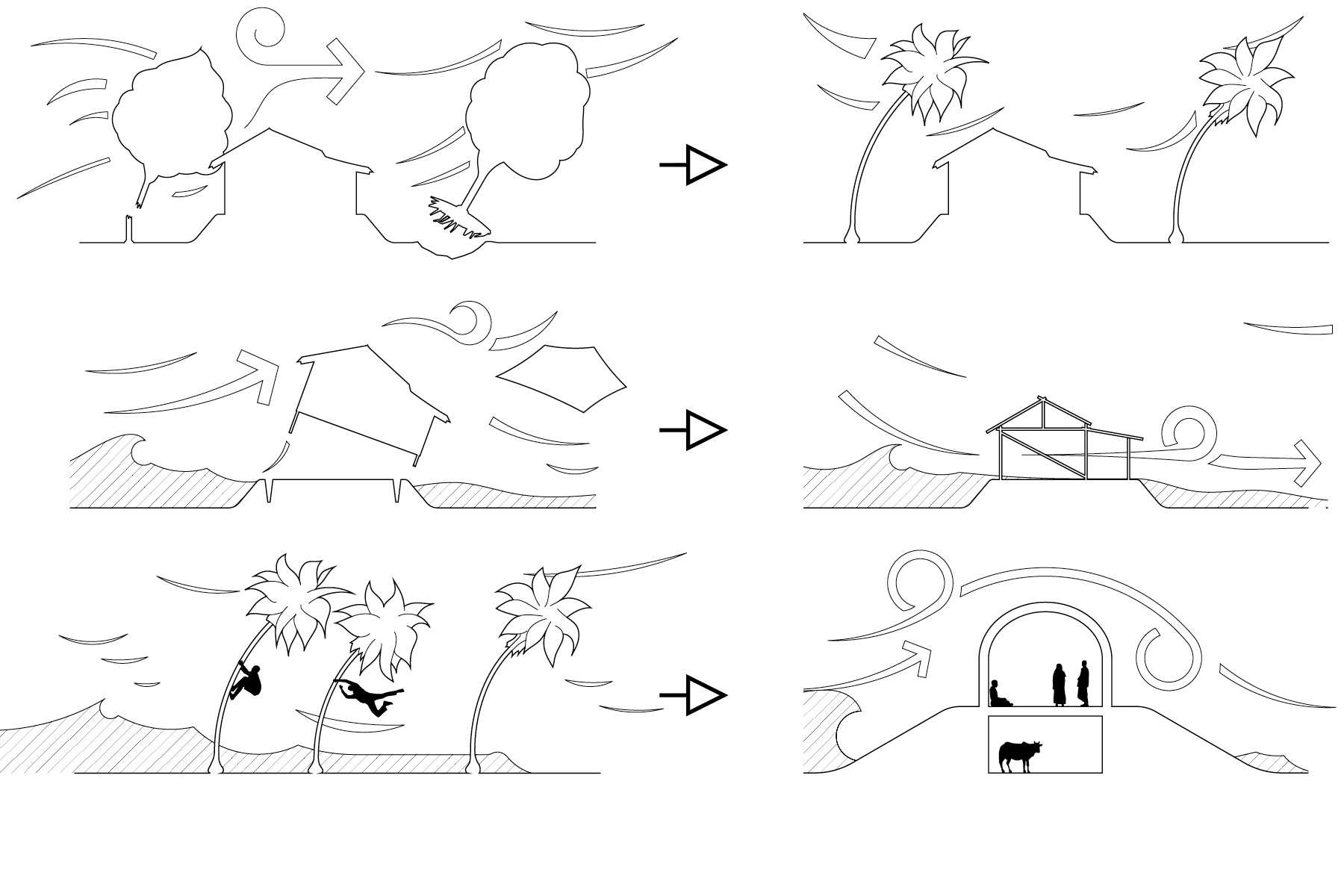 A strategy for withstanding cyclones in coastal Bangladesh

In November 2007 the cyclone Sidr struck the coast of Bangladesh killing 3,200 persons and 460,000 livestock, and displacing 8.4 million people.  A month later the AA Diploma 7 travelled to Bangladesh to witness the devastation.  As we learned from the Brac University Department of Architecture in Dhaka, the country needs more cyclone shelters.  The existing ones are far apart and fill at ten times their capacity.

One of the reasons why cyclones cause casualties is that people are reluctant to leave their houses unattended.  They might return home and find their farming animals stolen, especially if the storm is not as severe as expected.  When the storm is severe, those who stay behind are exposed to deadly winds and water surges.  The bamboo houses are flattened either by their resistance to the storm or by falling trees.

This project drafts a cyclone sheltering strategy in three parts.  The first is to encourage people to remove trees which could fall on their houses.  The second is to make the structure of bamboo houses cyclone-proof by replacing rigid walls and roofs with a removable envelope made of rollable bamboo staves and polyethylene sheet.  In preparation for a cyclone the walls and roof would be rolled and stored in a secure waterproof chest supplied by the government to every household.

The third component of the strategy is to provide a cyclone shelter capable of receiving both people and livestock.  Most shelters are raised on stilts, but a governmental study shows they could be built on an artificial hill.  This project proposes to house the animals within the hill in the shelter’s basement.

Although most shelters are used as schools throughout the year, this shelter is designed as a mosque: an important civic building naturally suited to dense occupation.  It consists in tall vaulted spaces made locally with cement-stabilised compressed earth blocks.  By virtue of its mass and double curvature, it would withstand the summer heat as well as the fiercest storm.

The project sketches are available as a Pdf book: A Cyclone Shelter For Coastal Bangladesh