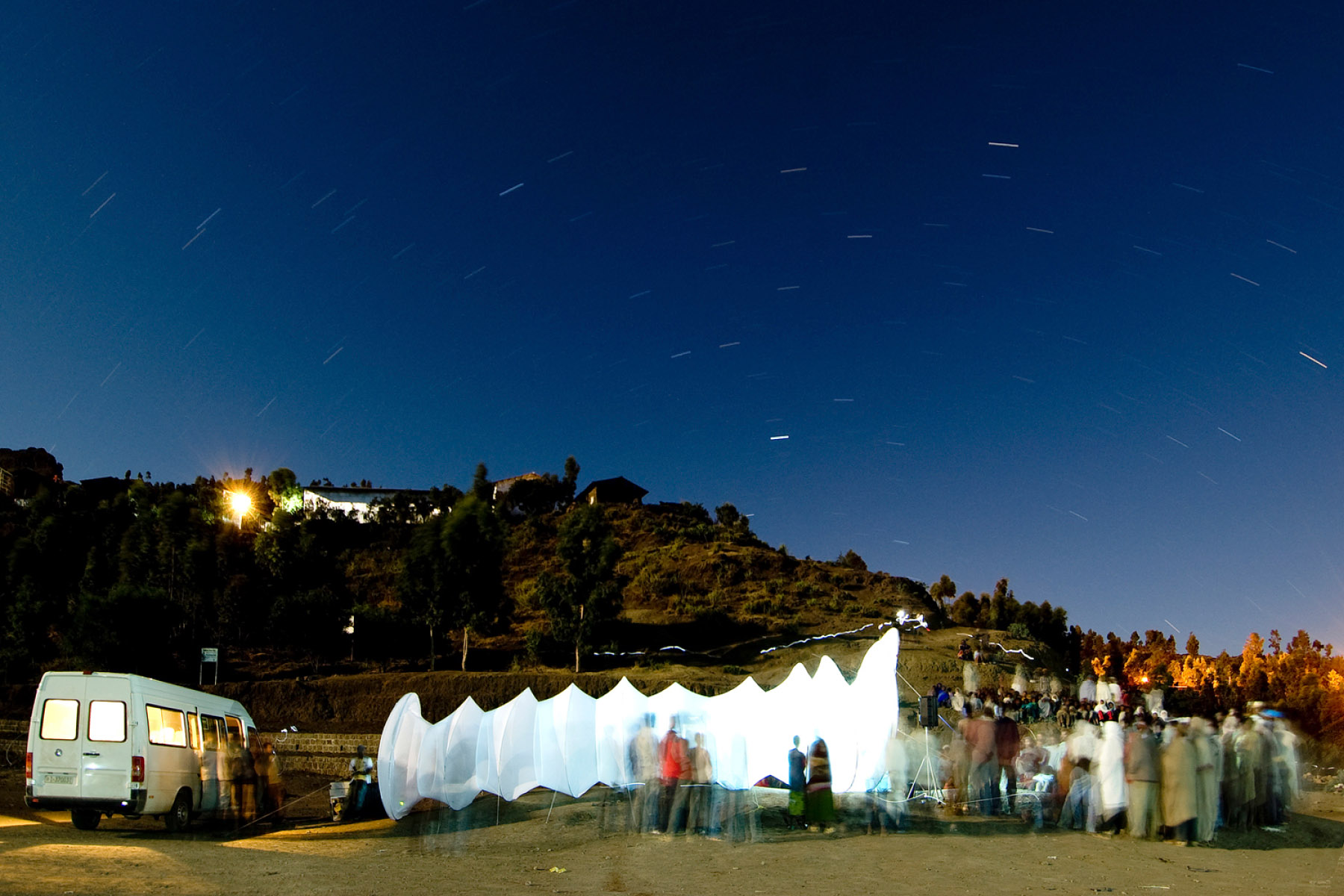 Portable cinema made in London and installed in Lalibela, Ethiopia for a five-night festival

When architect Rita Lambert was working on Feilden Clegg Bradley Studios’ Score Ethiopia sports facility project in Lalibela, 335km north of Addis Ababa, she asked members of the town’s 20,000-strong community what building they wanted. They requested a swimming pool. Knowing her contacts at the Architectural Association were looking for a live project for their students, but thinking this was a little too ambitious, she asked for their second choice: a cinema. Soon after, 12 students from Diploma Unit 7 flew from London to Ethiopia to help fulfil this dream, extending the unit’s focus on developing countries from field research to action on the ground. With only three weeks to prepare, everything had to be designed, built, packed and, having hired a van and a car at the other end, carried in bags and boxed by the students.

Upon arrival in Addis Ababa, customs officials deemed the generator and projector – bought using donations of £4,800, also raised in three weeks with the assistance of AA Foundation development director Esther McLaughlin – ‘suspiciously expensive’, so project managers Helen Evans and Andrew Tam were detained for negotiations. After two days, through a combination of persuasion and cash deposits, they were allowed to import the equipment and join the rest of their team. A few days later the inaugural five-night Lalibela Touring Film Festival began.

The community was not told what to expect, so the emergence of a 15m-long fabric sock from the back of a white van caused delight and intrigue. With practicality in mind, the collapsible Slinky-like structure was designed to enclose backstage space during screenings, with a screen at one end, a projector halfway along its length (sat on a flat-packed CNC-cut plywood stand) and a generator at the open end, located far enough away so as not to be heard by the audience. As dusk fell, crowds of up to 500 villagers gathered and the whole thing came to life, transforming off-the shelf tent poles and a bag of polyester netting (typically used for underwear or indoor cricket nets) into a giant animated glow-worm.

When asked what the audience would like to see, Lalibela’s mayor said: ‘Water’. With that, the remote landlocked Ethiopian community sat down to watch David Attenborough’s award-winning documentary of the oceans, The Blue Planet. Few who witnessed this event are likely to forget such an experience, be they from Lalibela or London.

Text from an article by Rob Gregory in The Architectural Review:
Architecture students present African town with a ‘giant glow-worm’ cinema